The perfect time for parents to relax, recharge and reconnect with each other.

After the kids have smiled their last sleepy smile you close the door and drift downstairs ready to let the adult time begin.

I would have agreed until about 6 months ago. I was in search of a way to fix our bedtime woes.

{Awesome update! This bedtime routine has now been working for us for 4 years. I couldn’t be happier. I hope you will find the same success getting the kids to go to bed and making bedtime a wonderful experience for everyone.}

M and M had become out of control at bedtime. Begging for one more drink, yelling for me (or at each other), crying for me to stay in the room.

It was awful… and of course, I made terrible parenting choices.

I was so, so exhausted by that point in the evening that I was doing things I don’t even consider during the day. 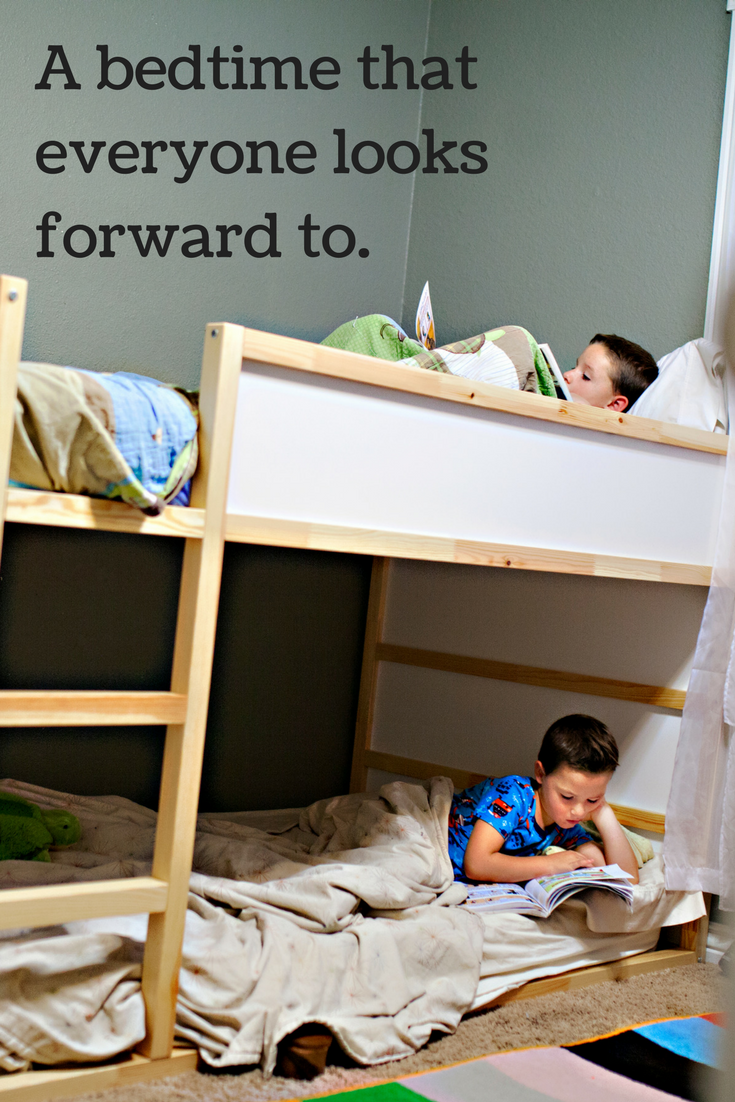 I just kept picturing their dreams being filled with my angry/ exhausted/ frustrated face… since that was the last thing they had seen.

I would go soft and let them get away with anything. It got to the point where Hubs had to put them to bed for me… I had lost ALL credibility at bedtime.

that sounded so crazy I had to read it three times before deciding to put it into action. (Affiliate link.)

Let the kids decide when to go to sleep.

My brain was spinning. “WHAT?!? We would be nuts to consider it!  No way, no way… NO WAY! Hmmmm…. what we’re doing isn’t working. Trying it out couldn’t hurt. Why not… we’re mostly nuts anyway.” 😉

We set a plan… decided on the boundaries and braced ourselves for a very long night.

We had the kids prepped for sleep by 7:00 pm. (Teeth brushed, jammies on, stories read.) Then we let them in on the “rules” for the evening. We told them (very honestly) that we had enjoyed spending the day with them but now we needed some “adult time”.

They were welcome to stay awake, but they were to play quietly in their room.

We would know they were ready for bed when they came out of their room. (The hidden meaning there is that they can only come out once!)

We told them to enjoy their rest and then walked down the stairs.

Would you believe they played quietly for 1 hour and then ASKED to go to bed?!?!

You read that right they actually said “I’m tired. I want to go to sleep.” 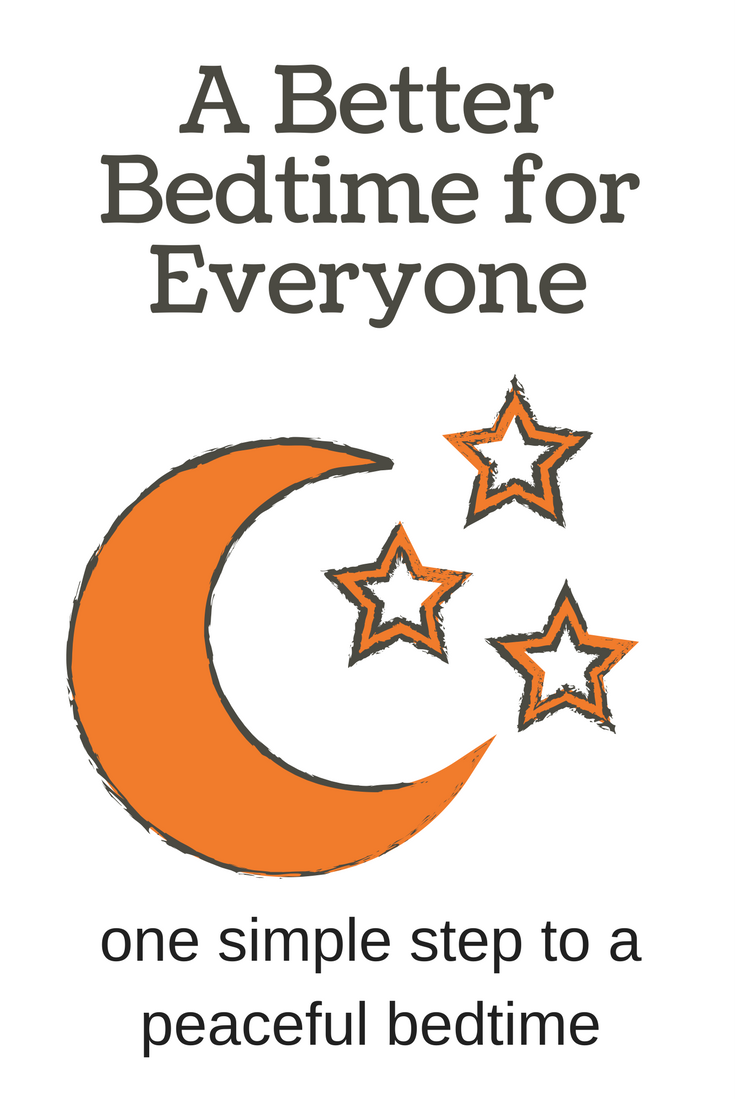 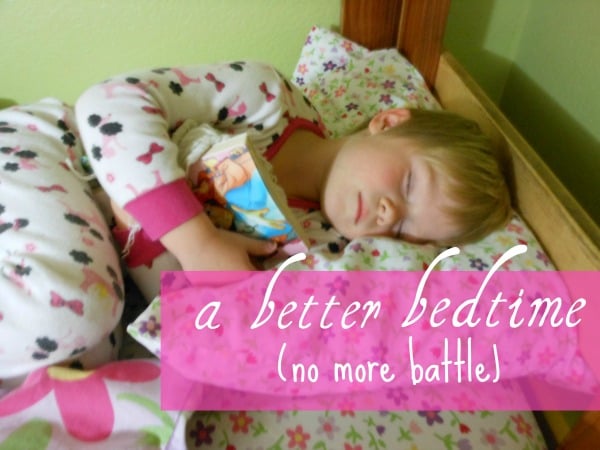 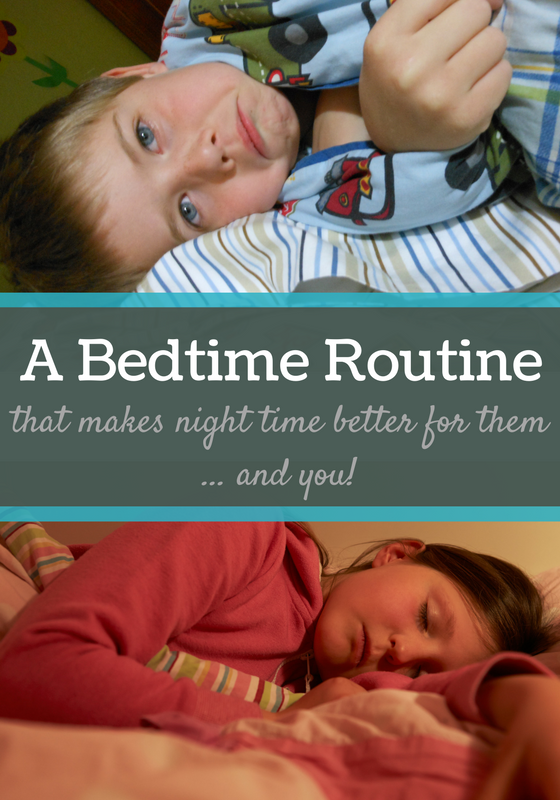 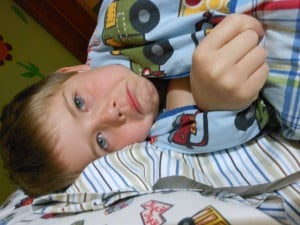 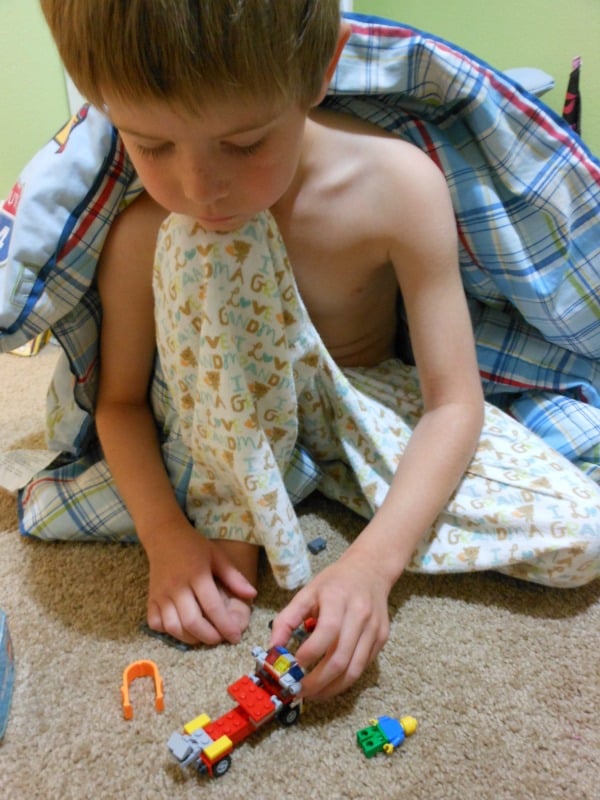 Extra Tips for this bedtime routine:

I know how scary and challenging the first night of this bedtime routine can be. (I’ve read the comments :)) YOU GOT THIS!

Ready for bedtime?  Let me know if this bedtime routine works for you too!

* It’s working! Here are some great experiences from the comment section!

Larissa says: We’ve used this concept with our children and the great part about doing it with your first, and then subsequently having more children…they learn the process off the older one. So the ‘battle’ we had with our first at around 2yrs old, wasn’t even an issue when we had our second child. She just saw what her big brother was doing (they share a room) and we had no battle with her. We have three children now, and when the baby is old enough to move in with her sister, same thing; wonderful bedtimes.
I always feel for the parents that have to stay with their child until they fall asleep. My alone time is so precious starting at 7:30pm. I don’t know what kind of a mother I’d be without it!

Kat says :  my son’s 2-1/2 now and i’ve been doing this since he was around 16 months old or so. it works great! he chooses when he wants to go into his room (no later than 7pm – he usually goes in around 5:30 or 6pm) and basically decides when he wants to go to bed (usually falls asleep between 8pm-9pm). he sleeps better and it’s less stressful for him and us. i do this with his naptime too, but usually he just has a 1-1/2 hour “quiet time” because he stopped the naps but his doc recommended a quiet time around the same time as his nap would be. and he’s so much better when he’s rested even if it’s just playing in his room.

Lydia says: THANK YOU!!! My husband insisted I write and thank you! We have been doing this with our children for about a month. I was a little skeptical at first but it has proven effective. I have 2 boys (5 & 3) and one girl (2). I am expecting my fourth in 2 weeks and have very little patience at the end of the day. We tried this after a particularly taxing day and are amazed how well it is working. We would sit in our boys’ room until they were asleep, then they would come into our room in the middle of the night because they were scared. The first night was a dream! They went into their room at 7 and didn’t come out until they were ready to go to bed. We have family close by so some nights we are out later than bedtime. However, when we are at home, they understand the process and jump right back into our bedtime routine. My boys are sleeping better than ever and I am getting some much needed talk time with my husband after the kids go to bed and am much more patient with them. We don’t yell at them as they are going to bed anymore. Our daughter has been a good sleeper from the beginning but she is also still in her crib in her own room. We will do this with her when she moves into a big-girl bed so hopefully that transition will be a little easier.