Talking to kids can be overwhelming. It’s not planned, it’s never planned. And you want to say the right thing so badly… the first time. Just like anything with parenting, talking to kids takes practice. Lucky for you kids let you have lots of it!

One of those times that having the right thing to say is so important, is responding to kid confessions. Your little one has just revealed something and you just don’t know how to respond. Below you will find tips for handling these sticky moments.

{Privacy in conversations is one of the most important parts of talking to kids. With that in mind, the words and situations in the story that follows  have been changed to protect the kid who confessed.} 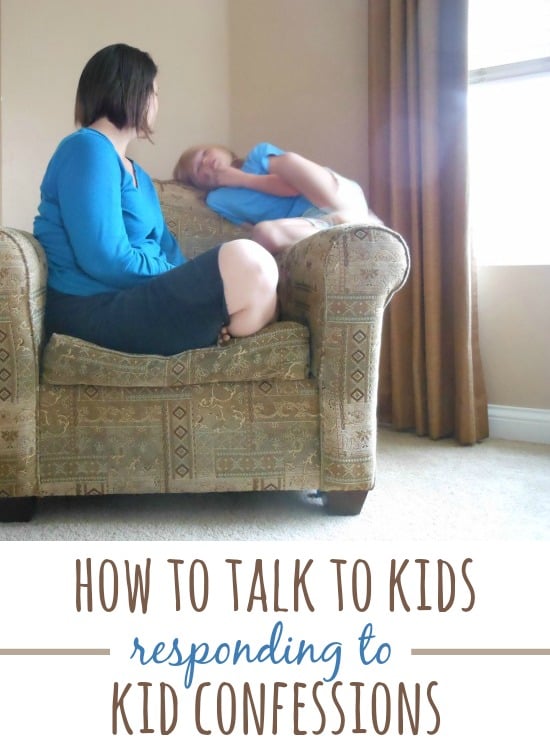 “Mom, I was swinging branches from the tree.” Her head tilted slightly to the ground and her tone quiet, I knew this was a confession of less than ideal behavior.

“Yeah, over my head.” I waited a minute to see if something would follow.

“Did something happen when you were swinging the branches?”

“Dad said I could have hurt someone.”

“Yeah, if someone was behind me or the dog. I could have hit them.”

“Swinging branches can be pretty dangerous. Did someone get hurt?”

“Phew, that’s good. How do you feel about it now?”

She shrugged. “I wish I would have thought about it first.”

“Oh, like how your actions could have affected others?”

“Sounds like you really learned something, thanks for telling me about it.” That was it. The subject was quickly changed. The conversation lingered in my thoughts for the rest of the morning though. So much happened inside of those few sentences. I wanted to dissect it… and then I wanted to share what I’ve learned with you.

Hearing and Responding to Kid Confessions

When she came to me with this confession I was doing cartwheels in my head. Did I really care that she was swinging a branch? Of course not. What I did care about is that she trusted me with something important to her. She wasn’t afraid of my reaction and perhaps she was even looking to me for extra guidance. She’s 7 now and a playful mistake isn’t huge in my parenting book, but she’ll be 10 before I know it, and then 13… and then (okay no need to think about that now. 😉 ).

If she can come to me now then maybe, just maybe, she’ll be able to come to me with the hard stuff that isn’t all that far away. That’s my hope.

How to talk to kids: The Do’s

How to talk to kids: The Do Not’s

What if the confession is to something that hasn’t been addressed by another adult?

In the case of the spinning branch, Dad had already handled it. (I actually knew all about it before she even told me.) Sometimes though kids will confess to something that no one knows about. That’s AWESOME… you know why? It means they didn’t have to tell anyone… and they still did. YAY!

Of course the incredible honesty doesn’t mean there will be no consequence but handling it with respect will make sure they are willing to come clean in the future.

While you are listening and questioning and respecting, try to figure out if the natural consequences were enough for you. Did you feel like the lesson was learned? If not, what guidance can you give to help your little one correct their own mistake? Something broken? Fix it. Someone hurt? Find out how to help soothe them.

If you still feel like you need to take parental action, be calm. Revisit the issue afterwards and reiterate just how grateful you are that they came to you.

Are there any tips you would add? Has responding to kid confessions been easy for you or a little more challenging?