Parenting Self-Care Family
You are here: Home / Kid Activities / 3 (easy, fun & free) Solar Eclipse Activities for Kids
1.1K shares
It’s billed as a once in a lifetime experience– a total solar eclipse that will cross the United States on August 21st this year. My family lives in the mid-west, and we’re expected to have a spectacular view of the celestial event including two and a half minutes of “darkness” in the middle of the afternoon.
My children can’t wait to see what it will be like so we’re using the weeks leading up to the eclipse to learn more about it. Whether you live in the path of the eclipse or not, you can also shed some light on the sun and celebrate its amazing power! 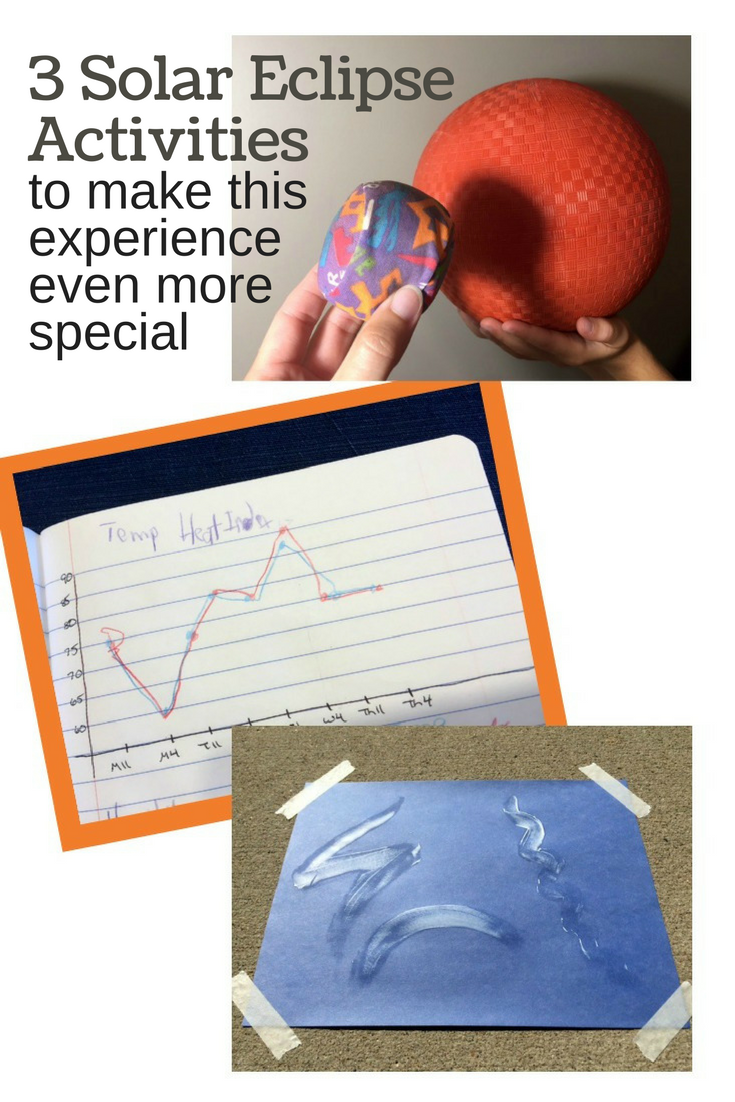 Eclipse Primer: What is a solar eclipse anyway? The moon will pass directly between the earth and the sun, casting darkness on a part of the earth’s surface.
You can demonstrate how it works with just three supplies: a large ball, a smaller ball, and a desk lamp.  Explain that the lamp is the sun and the large ball is the earth.
The smaller ball represents the moon. Shine the light toward the “earth,” then have your child move the “moon” between the light and the earth. The shadow on the larger ball is the effect of the eclipse.
The shadow only covers a small portion of ball.  That’s what makes this year’s total solar eclipse so special!
The path of the eclipse is only about 70 miles wide and runs from west to east from Oregon to South Carolina. Even if you don’t live right along the line, a  partial eclipse will be visible from everywhere in the U.S.
Light and Dark: The sun’s rays shine down on us with tremendous power. Let your kids explore it with a sunscreen print.
Use a dark piece of construction paper and have your child fingerprint with a bit of sunscreen. Place the paper outside in the sun for a few hours (you may need to tape it down).
After that, the paper should have faded except in the places with the sunscreen. It’s a great way to reinforce why we wear sunscreen at the pool and when playing at the park.
Heating Up:  Temperatures soar in the summer months. Turn your kids into temperature trackers with an outdoor thermometer.
You can get readings every few hours to show how temperatures rise and fall over the course of the day.  You can also compare the temperature in the open sun and in the shade.
My older child took temperature and heat index readings twice a day for four days, then we plotted his data on a line graph.

Other Fun Sun Activities:
Take some time this summer to celebrate our closest star and prepare for the greatest show above the earth– the total solar eclipse on August 21st.

Kara White is the mom of two children, a son, 7, and a daughter, 3. Kara enjoys reading, baking, and trying to finish a cup of coffee while it’s still hot!