Sibling wars are at a high in our house right now, so I thought an activity that forces them to work together would be perfect.  That is how these friendship games were born.

what you need: scarf ~ cones (or small objects)

I set up cones in the backyard to form a short obstacle course.  I held the scarf in my pocket so they wouldn’t see it.  As I was placing the cones, they started asking questions.  I vaguely explained my plan and told them to go ahead and practice.  I asked what they thought about this course, would it be easy or hard?  Of course, since they are in constant battle at the moment, there was a lot of blocking and running over going on.  So I calmly said, “Actually in this race you both have to finish together.”  They were so busy trying to win they didn’t hear me.  I waited patiently at the start and when they arrived back I made sure they were done practicing.

Once they were positioned at the starting line, I started them off.  “One, Two. . .wait a minute.  I forgot something.”  I reached into my pocket a pulled out the scarf.  As I tied them together.  I questioned them on whether this would make it more or less difficult.  They thought being tied together was the funniest thing.

I made a path wide enough for one person, but not for two.  It took them a while to problem solve this one.Every time one of them (Little M) fell, I made them go back to the start.  They laughed the whole time,  I was surprised either one of them could stand up.  Eventually they figured it out and ran the course a few more times. 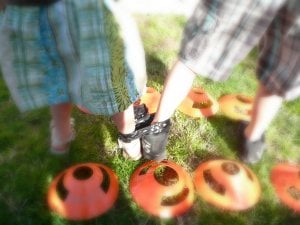 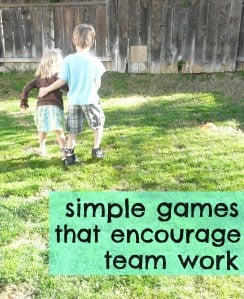 Even Daddy joined in. . .although he was totally cheating!!!

what you need: chalk ~ kids

Along with the course, I drew out a large rectangle.  (Large like two kids could fit in it.)  I used different color chalks to add decorative details around it so that it looked like a large picture frame.  I wrote the word FRIENDS below the frame and asked the kids to work together to draw themselves inside the frame.  They had to move themselves around to make sure they fit.  I didn’t get a good picture of the end result (which they never even looked at!)  but the process was a wonderful lesson on filling space.

Doesn’t he look peaceful? (It might be the only picture I have of him that isn’t blurred with movement!)

Have to throw out a Grandma acknowledgment. . .she made the adorable skirt!

All in all, the morning was really fun and for the half an hour they were engaged in the activities they worked really well together.  I’m going to have to plan more . . .the sibling war is still on!

I know that not everyone is enjoying spring like temperatures.   This game should be fairly simple to modify as an inside activity, leave a comment and let me know what you came up with!