Big M is a mover.  He has always been a mover.  He never wanted to be held or slowed down, apparently he had very important places to be.  He was army crawling at 4 months and walking (um running) at 7 months.  We learned pretty quick that trying to stop him from moving was not going to work in our favor.  We needed to come up with an energy buster or two.

We spend a lot of time outside where he can move, move, move.  Once in a while though a burst of energy will show up when we least expect it (and when we really don’t want it)!

If I find myself asking him to “calm down” over and over, I know we have a problem.  And the problem is not with his energetic little body.  He needs to move, and no amount of pleading is going to change that.  So what’s the answer when I can’t send him outside? 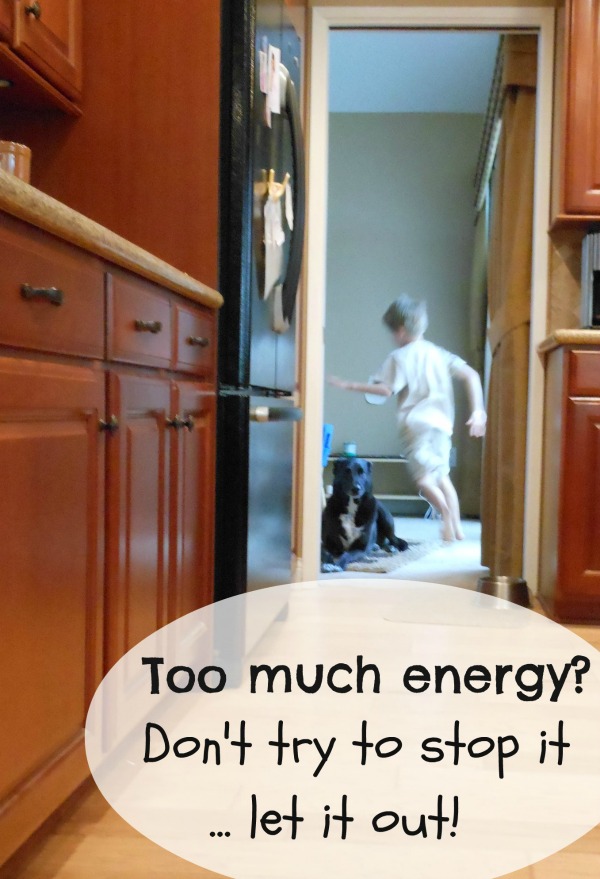 I have set up a route he knows well.  When I say go do some laps, he can quickly pick a starting place and go.  There’s no set up and only a few rules.

1.  Watch where you’re going. (Don’t run over the dog, your sister, or me)
2.  Keep your hands to yourself. (You’re moving too fast to grab a chair or your sister without hurting someone)
3.  Have fun while you run.

Once in a while we add in a little variety.  I’ll have him run backwards, crab walk, sidestep, gallop, tiptoe or hop.  Sometimes I give him a number of laps to do, sometimes I set the timer.  I want it to be fun and feel good to M and M so they will be excited about using up this energy.

If you don’t have a large area to run, pick a route that takes your kid through different rooms of the house turning and weaving or mix it up completely.  A dance routine, jumping jacks, or full blown wiggle session will work too.  The point is, don’t try to stop it… LET THEM MOVE!

What is your favorite energy buster?