Parenting Self-Care Family
You are here: Home / Kid Activities / why should you read chapter books with young kids?

Reading is important.  Reading is so important that you have probably already read many articles, posts, and books on how important reading is.  Big M and Little M have been read to since they were old enough to sit in my lap.  We’ve drooled (quite literally) over board books, “ohhh”ed and “ahh”ed over picture books and happily jumped into the exciting world of chapter books.

It was a couple of Christmases ago, (Big M was 5 and little M was 3) that my sister handed out the greatest gift our family could have received.  Two books from the Magic Tree House series written by Mary Pope Osborne.  We sat down and started reading.  We tore through book after book as M and M begged for more.  They followed Jack and Annie (the fascinating brother-sister duo) throughout history.  They expanded their imaginations recreating the scenes as they ran side by side through our backyard.  On more than one occasion Big M has sat for over an hour listening as a Magic Tree House book is read from cover to cover.  (No small feat for my EXTREMELY active little boy.)

These books were such a hit, I decided to up the ante.  We picked up The Tale of Despereaux by Kate DiCamillo and spent an entire month engaged in the story.  The kids and I found ourselves talking about the adventure throughout the day, relating the story to our own daily lives and pining away for the next time we could continue reading.  We were hooked.  When the book ended I found myself in search of another, eager to begin a new exciting story. 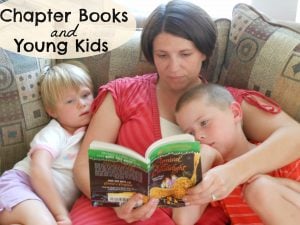 That brings me here… to the reason for this post.  As we began the next book I started really thinking about what M and M were gaining from these experiences and how I could expand on them even more…

1.  Chapter books will build on a love for reading.

2.  Kids will gain an even greater appreciation for the written word.  (There are no pictures to pull you through.)
3.  Chapter books force you to practice patience.  It would be impossible to read a 300 page book in one sitting.  With chapter books you are often forced to press pause on something so exciting.  (How many times have you told yourself “just one more page” while reading a nail biting novel?)
4.   Visualization is a given.  The story unfolds in pictures created in your kids’ imagination instead of an illustrator’s vision.
5.  Language, language, language.  Chapter books use descriptive words to replace pictures.  Imagine the new words your little one will be hearing over and over.
6.  Family Connection.  Most of the movies and shows that kids are interested in can be pretty boring for adults and vise versa.  But reading a carefully selected novel together can be exciting for everyone involved.   (Once they can read on their own it may not be quite as easy to join in the journey, so make sure to really enjoy it.)

What age did you start reading chapter books with your kids?

Make sure to visit Quick Reader Chapter Books and Chapter Book Review to find out what we’ve read!

***Make sure to read the comments.  There is some really great information left by readers!***