Parenting Self-Care Family
You are here: Home / Family Connection / How to Talk to Kids About Death
879 shares

This summer we had to say goodbye to a very special person in our lives. My Grandma passed away at the end of August. She was 95 (almost 96) and as healthy as anyone could hope to be at that age, but she was aging quickly. This was far from unexpected.

For me, her passing was a mix of sadness and relief. I knew she was ready, I knew her body was tired, I knew she had lived a good LONG life. I knew that it was time. There was a sense of relief for us as adults. She went just like she wanted to, living independently until 3 weeks before she died. Surrounded by friends and family. She will be so very missed, but it was time.

I found telling the kids to be hardest thing for me to handle.  Their Gigi (my grandma) has been a big part of their life, all of their life. She lived close which meant breakfast dates and evening visits. She came to every birthday and holiday. She talked to them about school and taught them her favorite card games. Every year older they got I felt a tug of happiness… they will be old enough to have real memories of her. We were very lucky.

I dragged my feet the week we knew it was happening. Before she was officially moved to hospice we all had a pretty good idea that she wasn’t coming back from this… but then again she was very strong. What if I had the talk with them and she bounced back? What if she was on hospice for weeks? Months? I didn’t want them to have the burden of holding their breath every time the phone rang. At that point we decided to wait.

When she was moved to hospice and sleeping round the clock we knew it wouldn’t be long. I was still hesitant until a conversation with my sister (she knows exactly the things I need to hear when stuck with a big decision). We were about to be surrounded by cousins and family that M and M barely know. She pointed out that it really wouldn’t be fair for them to hear about it in the presence of strangers. She’s so smart.

In the end, I had nothing to worry about. When you slow down, listen and share honestly, kids will amaze you every time. Their questions where thoughtful, their comfort for my mom was sincere, their sadness is real but in such a meaningful way. 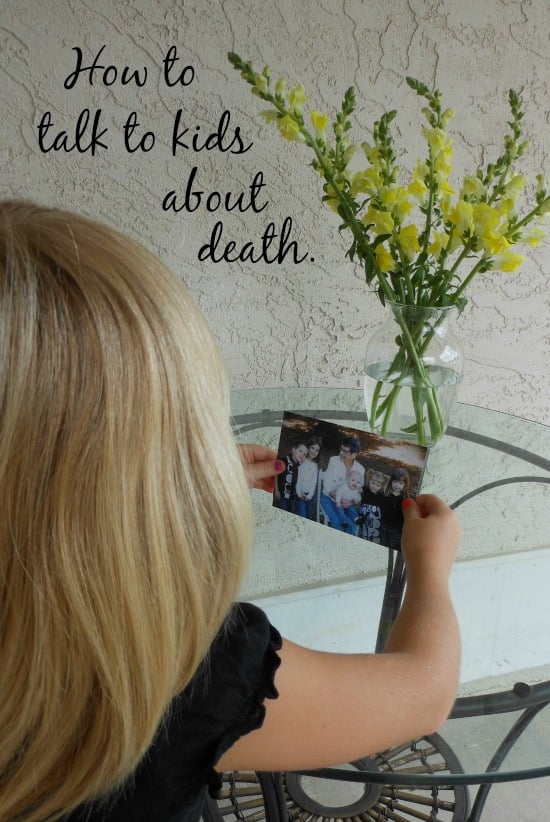 How to Talk to Kids about Death

Be honest but age appropriate. Use actual terms. Passed away is a very polite and gentle way to talk about death but it doesn’t help kids understand the truth. Has this person been sick for a while or was this death unexpected? Where were they? Who were they with?

Keep it short but leave the conversation open. I tend to over explain. I talk A LOT. Most of the time if I’m quiet, I find out much quicker what they really want to know. When they are done talking, that’s okay. This isn’t the type of conversation that happens once. There will be questions and comments that come up over time.

It’s been a little over two weeks since my grandma passed away and the conversation is still happening. That’s the way it goes when you talk to kids. They need time to process, time to adjust and time to figure out what questions they have.

Share your emotions and accept theirs… whatever they are. Little M cried when I told them. Big M made a joke (a joke his Gigi would have liked). Both responses were right, because they were right for them. We are all so different. Some people need to feel useful in times of sadness, some need to be alone, some need to yell, while others are silent. Kids are no different than adults. Give them the space to feel the pain in the best way possible for them.

Be open to any questions. Kids don’t know the politically correct response to death. They say what they think and feel when they feel it. Bravo to them. Sometimes their questions sting or bring emotions right up to the surface. If something they say makes you squirm inside just remember they are trying to make sense of something that doesn’t make any sense at all.

If you are worried about the feelings of others, whisper to your little one that you would like to answer that question when it’s just the two of you. I would go as far as explaining why you wanted to wait. “Auntie was already upset and I think your great question was just a little too much for her right at that moment. Let’s talk about it now instead.”

Know your kids. How do they process information? Do they write things down? Do they role play with dolls? You can help guide their grieving into channels that makes sense to them.

Big M needs to know every detail of every situation. I was prepared for his questions… I knew they were coming. He wanted to know about who took her from her bed, how she got to the mortuary, what would happen when she got there, when she would be buried, when we could visit. For him there is comfort in the facts.

I would love for you to add advice or ideas in the comment section.